What About Product Positioning Part Two: The Key to Communications Success in Marketing, Advertising and PR

This is Part Two of the article blog posted yesterday and written by the founder of On-Target Research. Our respective companies – mine is Research Target Group – have published this article as a service to medium-to-large businesses to assist their marketing, advertising and PR campaigns.

What About Product Positioning Part Two: The Key to Marketing, Advertising and Public Relations Success

What is Product Positioning?

“… It all started with a couple of guys named Trout and Reis. Beginning in 1969, and then into the early 70’s, these two young marketing geniuses, Jack Trout and Al Ries, wrote, spoke and disseminated to the advertising and PR world about a new concept in communications called ‘positioning’. Until then, agencies primarily based their media campaigns on internally conceived benefits of the client’s product.

“These campaigns may have been creative, they said, but they would simply no longer get the job done in what was a heavily over-communicated society. There were too many products being pushed by too many advertising dollars on too many media lines, and the prospect’s head was just too full of everyone’s noise for the old kind of advertising to get through and make any kind of impact.

“The game had changed, said the boys. If you wanted to reach your prospect, the focus of your campaign could no longer be based on internally conceived benefits – what management thought was cool, the target was now the mind of the prospect. You had to focus on the perceptions of the prospect. You had to find a place in the mind of your public in which to put your product.

“The way you do that is to tie the product or service to something that is already in the mind. In so doing, you are able to instantly communicate to an audience about something about which they were previously unfamiliar.

“Indeed, business management expert L. Ron Hubbard later researched and wrote about the philosophic basis of positioning and what made it work:

“‘THE UNFAMILIAR IS RAPIDLY INTRODUCED OR COMMUNICATED BY COMPARING IT TO A FAMILIAR.

“‘Joe knows nothing about practice boxing gloves, and there are none there to show him, and he will be fairly satisfied if he is given a familiar object, pillows, to compare them to.

“‘Positioning takes advantage of the fact that one can compare the thing he is trying to get the other person to understand with desirable or undesirable objects…’ (end quote.)

“This technique lets you cut through the noise of the competition and all the other communication messages your audience is being pounded with daily.

“This is done by screenwriters and others in Hollywood all the time. It is how they pitch scripts and story ideas. This was humorously depicted in the Robert Altman film of some years ago called THE PLAYER. Periodically during the film they would cut to some screenwriter pitching a story idea to a producer or studio exec.

“’Okay, Okay it’s like Patton but in outer space.’”

“My daughter, who is a budding film producer in town, recently got a script she likes and is shopping it around. 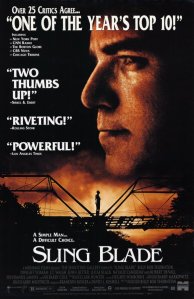 “Now this may or may not be the stuff of huge movie grosses or even critical acclaim, we’ll leave that to Roger Ebert. But, having seen SLING BLADE, I instantly had the concept of the movie. It related to something in my mind. Something with which I was familiar.

“A friend is telling me about a great new book he is reading. ‘What’s it like?’ I ask.

“’It’s a Tom Clancy-like story from the viewpoint of Russia’s ‘new’ KGB.’

“Okay, I’ve got a concept of the book.

“This, of course, is also is woof and warp of politics.

“The person is a ‘Reagan Republican’, a ‘Kennedy Democrat.’

“Or you can position something as better or worse than what is in the mind. She’s to the left of Karl Marx, slightly to the right of Genghis Khan, richer than Rockefeller… ”

See Part Three. (NOTE: Part Three, the final part, “The Easy Way to Position a Product,”  will appear separately. This article, posted as a public service to assist medium-to-large businesses worldwide, comes from On-Target Research [my friend’s company] and Research Target Group [my company]. Information about our company services is available through researchtargetgroup@gmail.com)

Internationally acclaimed biographer, novelist, ghostwriter, and sales-training expert. I write/ghostwrite biographies and historical fiction books commissioned by clients. Always five-star quality, I deliver more than what is expected. Readers of all ages love my books. My sales-training series of books/courses, LISTEN MORE SELL MORE, is the basis for my workshops delivered on commission only. I will ghostwrite books for clients on contract whenever available. Inquiries to commission a biography or legacy memoir, a sales-training workshop, a book written, or a keynote speech should be emailed to kulebooksllc@gmail.com. All comments and posts are welcome.
View all posts by Ronald Joseph Kule, Author/Biographer/Ghostwriter →
This entry was posted in blog posts, market research, Uncategorized and tagged ad campaigns, advertising, Al Reis, Jack Trout, KGB, L. Ron Hubbard, marketing, positioning, Positioning the battle for your mind, PR, product positioning, public relations, Sling Blade, Tom Clancy, Trout & Reis. Bookmark the permalink.