Posted on May 29, 2015 by Ronald Joseph Kule, Author/Biographer/Ghostwriter

(excerpted from the eBook and book by Ronald Joseph Kule)

(The Historic Run for the Three-Peat) 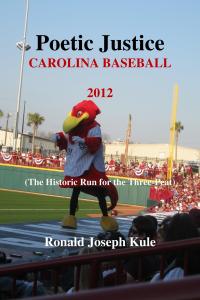 “At the end of the year, or the end of the job, if the cumulative effort is good enough, you get a chance to go to the postseason, and that is where it all starts.”  — Head Coach Ray Tanner

As a team South Carolina in 2011 finished with a 1.31 ERA in 10 NCAA Tournament games.  The Gamecocks’ bullpen finished 6-0 with five saves and an incredible 0.53 ERA in 33.2 innings of work in the NCAA College World Series Tournament games.  They did not allow a single, extra-base hit during the entire tournament.

Despite the loss of key veterans, Tanner’s vision for 2012’s recruiting class and veterans remained upbeat, even confident.  He knew by the numbers that a lot of veteran players with outstanding performances under their belts, those who stayed, would continue to perform at high levels.  Veteran senior, Friday-night ace and All-American Michael Roth stayed on this year, as did All-American, junior closer Matt Price.  Nolan Belcher; Ethan Carter; Colby Holmes; Adam Westmoreland; Tyler Webb; Patrick Sullivan, Logan Munson and Hunter Privette… stayed.  Forrest Koumas, who made the SEC All-Freshman Team and finished at 6-1 with a 2.96 ERA in 19 games and 12 starts, stayed.

The biggest question in the minds of Garnet & Black coaches and fans was whether the new infield would gel into a working unit early enough in the season to give them a chance at the end — to get back to Omaha would be a lot to ask of freshman players, but they would work on it.

Coach Tanner set out how right from the start, “It is not easy playing for me as a newcomer.  There’s an initiation.  You have to earn your stripes.  You don’t just roll in here and have anything given to you.  You have to earn it.  Sometimes there’s a step back, but you understand quickly that it’s not about you.  It’s about listening to the guys that have been here; learning all you can and learning to respect the game and the program.  As long as I’ve coached and as long as I get to coach, that’s not going to change.  That’s how it’s supposed to be.”

Excitement generated by the Gamecocks’ two, back-to-back national championships helped recruiting coach Chad Holbrook bring in an outstanding recruitment class.  By September 2011, he possessed the best class in the country.  He and the other coaches had every reason to feel they would be working with players they could fashion into another brilliant team and season.  They would just have to coach patiently and perceive what surfaced.

Among the new recruits were 16 freshman and five college transfers.  Whatever else, the 2012 Gamecocks would have a balanced makeup, because there were talented freshmen, recognized junior college players and national-champion veterans among them:

Evan Beal, a right-hander ranked as the No. 2 best high school prospect in state of Virginia by Baseball America, went 8-0 his senior season with a 2.41 ERA and 89 strikeouts in 65 innings.

Connor Bright, an infielder rated the No. 4 shortstop in South Carolina, batted a .485 average, seven home runs and 10 doubles.

L.B. Dantzler, an infielder and MVP of the Florida Collegiate Summer League helped lead his team to the FCSAA state championship and the 2010 NJCAA World Series in 2010.

Jordan Montgomery, a left-hand pitcher helped lead Sumter High School to the 2011 AAAA state championship and was 11-0 on the year with 114 strikeouts in 74.1 innings and a 0.38 ERA.

Chase Vergason, an infielder, in his sophomore year in 2011 at Brevard CC batted .294 with six doubles, five triples, 18 runs scored and 18 RBI.

Coach Holbrook’s network knew what they needed long before the 2011 NCAA trophy was handed over to the Gamecocks last summer.  The active roles of college baseball recruitment play out well in advance of the needs of one upcoming season.

On the other hand, having won a national championship and then another, makes it hard to not think about keeping the string alive and unbroken when a bulls-eye is painted on your collective back.

The first day Tanner gathered the new players inside of the club’s locker room in early fall of 2011 and he made his way clear to the new recruits:  “The pats on the back you had in high school or junior college… that’s not here.  The focus here is on emphasizing what we have to do today.  I’m not a coach that sits down, brings my team together to put a lot of goals on the board and talk about down the road and end of the year.  We talk about what we are doing right now.”

New and veteran players then mingled, left to work out their weight-training and health programs with assigned staff assistants who would prepare them for battle…”

Internationally acclaimed author, biographer, ghostwriter, and sales-training expert. I write/ghostwrite biographies, non-fiction and fiction books on commission. Always five-star quality, my work delivers more than what is expected. My novels are acclaimed by readers of all ages. My sales-training series, LISTEN MORE SELL MORE, is the basis for my workshops delivered on request and commission internationally. My LISTEN MORE SELL MORE series of sales books and training workshops have been acclaimed by international corporate sales consultants. I will ghostwrite and edit books for clients on contract. Inquiries to commission a biography or legacy memoir, a sales-training workshop, a book written,, or a keynote speech should be emailed to kulebooksllc@gmail.com. All comments and posts are welcome.
View all posts by Ronald Joseph Kule, Author/Biographer/Ghostwriter →
This entry was posted in books about baseball, books about sports, books by Ronald Joseph Kule, Gamecocks baseball, Gamecocks sports, non-fiction and tagged 2012, baseball, Chad Holbrook, college baseball, College World Series, Gamecocks baseball, Poetic Justice, Ray Tanner, three-peat. Bookmark the permalink.