Internationally published author and poet Ronald Joseph Kule was born in Bogota, Colombia. He is the son of an American father and Chilean/Colombian mother. He grew up the second eldest of seven brothers and sisters, learning self-defense and to adapt at an early age, described in his words: “Early on, I held my own at the refrigerator.”

He performed lead roles in grade school musicals, but his interest turned to classic books and his dad’s collection of jazz recordings.  Forced in his preteen years to abandon the books and music in favor of team sports, he discovered in Little League that he could throw baseballs accurately and, later, throw long touchdowns as a high-school quarterback. In college, he added cross-country running and took up competitive swimming. Academic studies never posed much of a problem; he averaged a 3.8 GPA and had an I.Q. of 184.

From Michigan to New York City…

Ongoing interest in applied philosophy and ethnology landed Kule in Manhattan after attending Oakland University in Michigan. He worked part-time as a professional model in New York City, turning down (naively) a generous stage and film offer from the William Morris Agency, opting instead to move to the West Coast.

Living in Los Angeles, he trained at the L.A. Academy of Dramatic Arts; learned fine-art drawing and painting at Mission: Renaissance Art Academy, Glendale, California — his paintings are held in private collections — and studied screenwriting under Oscar-winner Ernie Lehman.

Kule’s latest sales-training-book series, LISTEN MORE SELL MORE, undercuts, yet strengthens, other training and sales methods by offering correct basic data, a unique training approach, and an exclusive selling approach. The course/book combination includes new materials and anecdotal stories from the author’s career, as well as author-developed training drills. In volume one, a complete, step-by-step, sales-training format produces graduates who understand the correct basic data of sales, ensuring a command and complete certainty of how to apply what was learned on the course.

The book also serves as the author’s text for his Listen More Sell More Sales Training Workshops, which he delivers on contract to groups and companies. Further, this book and the series are designed for self-training, as well as in-house training by corporate trainers; both will find that this makes other sales materials easier to learn to understand and apply successfully.

This book is also available on Amazon.  A Swedish edition was released in July 2015. Volume Two of the series is slated to be released before Christmas.

More Books by the Author

In 2009, Kule co-wrote with J. David Miller Carolina Baseball: Pressure Makes Diamonds, foreword by three-time, NCAA Baseball Coach of the Year, Ray Tanner.  Kule and Miller followed with the eBook Pressure Makes Diamonds a Timeless Tale of America’s Greatest Pastime. Both editions chronicle the 119-year history of the University of South Carolina Gamecocks baseball program. The Limited-Edition book is available through http://RonKuleBooks.com. The eBook is on Amazon.com.

Poetic Justice Carolina Baseball 2012  is Kule’s account of the 2012 Gamecocks’ run for a historic, three-peat national championship, in which Carolina ended as runners-up at the NCAA Division I College World Series Finals in Omaha. 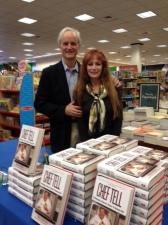 Kule’s CHEF TELL, The Biography of America’s Pioneer TV Showman Chef released on October 1, 2013, published by Skyhorse Publishing (NYC), to rave, five-star reviews. The book is available everywhere online and in stores and libraries, in hard cover, eBook and audiobook formats. Author-signed copies are available through the author’s web site.

Planned biographies include FRAPAR! ~ The Illustrations and Life of Francois Parmentier, one of France’s renowned satirical cartoonists.

Fiction books in progress  include ThunderCloud, a young-adult trilogy, and Aleria, a sci-fi thriller.

The author lives and works in Clearwater, Florida, with his wife Sherry Kule, a custom and limited-edition jewelry designer.
Google+
For more information about the author and his books, click this link.